Review: The Clue of the Black Keys by Carolyn Keene 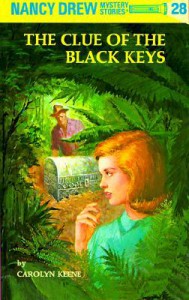 Synopsis: During an archaeological expedition in Mexico, two professors, the senior Dr. Joshua Pitt and young Terry Scott find a clue to buried treasure. The clue was a cipher carved on a stone tablet. Before the older professor had time to translate it, he and the tablet disappeared! Terry tells Nancy of his suspicions of a Mexican couple, posing as scientists, who vanished the same night as Dr. Pitt. Nancy follows a tangled trail of clues that lead to Florida and Mexico and a secret of antiquity that can only be unlocked by three black keys.

Mini-review: So this was one I hadn't read before and it's always nice to read Nancy Drew books that I've never read. As a kid I reread the same ones over and over again, but a couple of years ago my mom and her friend found a box of all the classics from Secret of the Old Clock to the Thirteenth Pearl, so I went through them and took all the ones I hadn't read and only now am I getting to them.